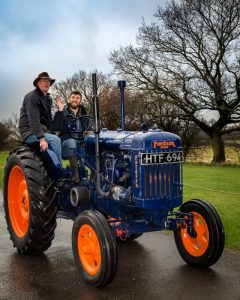 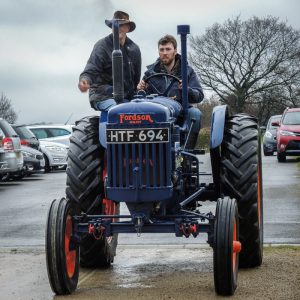 After a night of heavy rain, the morning of March 31st dawned dull and damp but this was not enough to deter a decent sized group of volunteers, friends and visitors gathering to await the  arrival of Martyn Williams from Radio Derby, driving a vintage Fordson Tractor.

At precisely 11-00 am,  the gleaming old machine arrived , driven by Martyn, and parked outside the windmill. 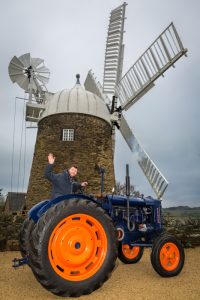 Martyn was welcomed by the Chairman of Heage Windmill Society, Alan Eccleston and Angela Ward, Chair of Friends of the Mill.

Alan announced that Martyn would join a list of distinguished guests who had performed the opening ceremony over the past 16 years – this being the 17th season since the mill was restored to working order in 2002. 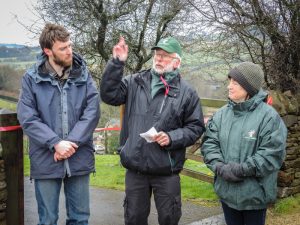 During that time, Alan mentioned that there had been some 50,000 visitors round the mill, that we were now into the 47th ton of wheat to be milled (over 30,000 bags of flour ) and that just over £250,000 had been raised, all of which had helped maintain and develop the mill. 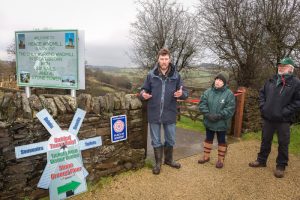 This was all achieved by a dedicated team of volunteers who he thanked for their continued support.

Martyn said he was delighted to be at such an iconic location, although a bit of sun would have been welcome! 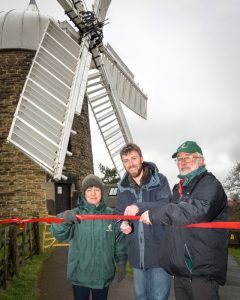 He praised the work of all the volunteers, all of whom contributed in some way to making the mill an undooubted huge success as a tourist attraction in Derbyshire.

To the sounds of a countdown from the assembled crowd, Martyn then cut the ribbon and pronounced the mill open for 2018, saying he was looking forward to touring the mill in due course but had to dash off to help volunteers plant trees in the Derbyshire Wildlife Trust wood at Alderwasley. 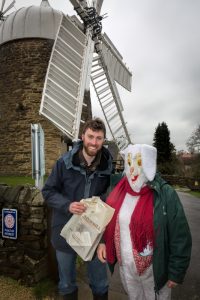 Before he left he was presented with a large Easter Egg by Wosemary Wabbitt, and said: ‘I will be back shortly’!