Congratulations to Sue Colclough from Clowne for winning this year’s Heage Windmill Art Challenge, now renamed the Margaret Bonsall Art Challenge in honour of the long-time past organiser of the event..

Under largely bright clear blue skies, the competing artists were invited to produce an image of the windmill, in the media of their choice, in just under four hours.

Certificates and monetary prizes were given out by the two Judges -Bryan Bonsall and Doreen Andrews, both artists from Matlock Artists Society. 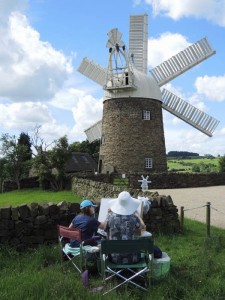 Bryan,  the husband of the late Margaret, presented her with the new  trophy, a Dartington crystal rose bowl, which will be held for one year by the winner. 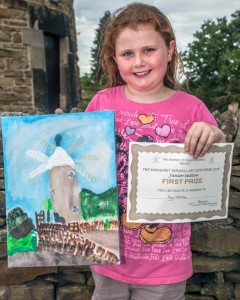 There was also a competition, for juniors under 16, which  was won by  7 year old  Amy Womble, who lives in nearby Harthill, for her acrylic on canvas.

The event was kindly sponsored by Alan Wilde Coaches of Heage in memory of Albert Wilde.