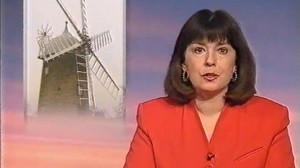 It is difficult to visualise Heage Windmill nowadays as the wreck it was before restoration, as so much work has been done to bring her back to working order.

Alan Gifford, one of the earliest volunteer workers, has recently found two video clips from BBC TV’s East Midlands Today which clearly show what was faced in bringing the windmill back to life in the mid 1990’s when it was in a seriously neglected condition. 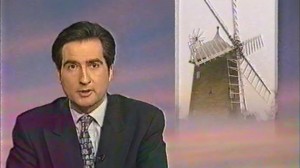 The first news report, probably in 1994 or early 1995, shows the eroded condition of the soft ironstone from which she is built.  Alan, with Margaret Kent , the then Chairman of Heage Windmill Society, and Dave Nicholls, another early worker, are seen examining rotten flooring, caused by water ingress.  The condition of some pieces of machinery are also shown.

In the second news report – 22nd of January 1997 – the  poor condition of the stone work is again displayed.  Some shots of the internal machinery are also shown, with new paint which has been added by volunteer workers. The group is also seen examining the sail which was damaged by a lightning strike in 1995, whilst Alan unearths what might be a hidden stone path way and a fragment of kiln tile. Dave expresses hopes for the future whilst Margaret cannot wait for the sails to turn again as a result of an application for Heritage Lottery funding which, in due course, contributed to the full restoration, even to grinding corn again and making Heage flour.