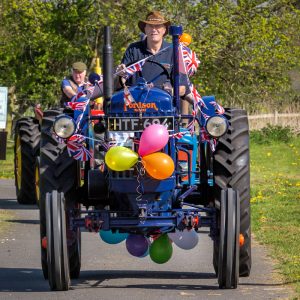 In recognition of bringing Tractor Days to Heage Windmill, John Allsop was invited to officially open the mill for our 2019 season.

In what was probably the warmest opening day since the windmill was restored in 2002,  John made his entrance in fitting fashion by driving his Fordson Tractor down the track to the windmill, escorted by two other tractors, driven by local men David Hornsey and John Gould. 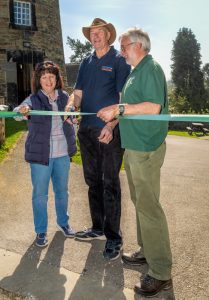 They were welcomed by a large gathering of people , including Alan Eccleston, Chairman of Heage Windmill Society, and Cllr. Angela Ward, Chair of Friends of the Windmill.

Alan welcomed everyone present and thanked in particular the team of volunteers who make the mill such a great attraction.

He introduced John Allsop, who was born and bred in Heage and has had a long standing love of the mill.  It was John who, many years ago, suggested he organised a tractor rally at the mill.  This has blossomed into memorable and well-supported Tractor Days which have greatly helped support the mill.

Angela spoke on behalf of Friends and mentioned the continuing need for more volunteers to help maintain the high standards set at the mill.

Alan then invited John to cut the yellow ribbon.  In doing so doing, he said he sincerely hoped the mill would enjoy a great season and that that weather would be kind throughout.