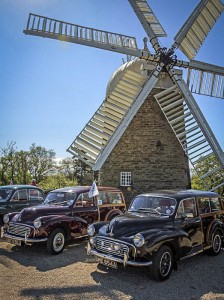 Members of ‘Mad Mog’ (Mansfield and District Minor Owners Group) and the East Midlands Morris Minor Owners Club dropped in at Heage Windmill on the last Sunday in April.

Around 15 cars arrived, dating from the 1950s onwards.  Many types were represented, including the old  split windscreen, four door, two door travellers with wooden framing,  etc.

There was also a good selection of traditional Morris Minor colours including the well-known Clarendon Grey and others such as Almond Green, Bedouin, Almond and Empire Green.